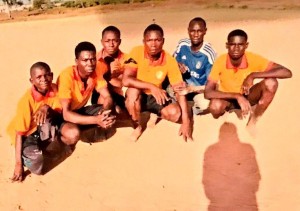 Internally Displaced Persons (IDPs) from Karamajiji in Kuchigoro area of FCT along Airport Road have won the inaugural football championship organised by Greater Tomorrow Children’s Fund founded by ex international and US based Paul Okoku. In a game decided at the weekend at the FIFA Goal Project Abuja, the boys from Karamajiji beat their counterparts from Waru IDP Camp in Apo Village 3-2 in the finals to lift the trophy, take home cash prize of N15,000.00 and cart home additional ball donations from the foundation. The full time had ended 3-3 after Isiaka Alhassan netted a brace in the first half before the boys from Waru came from behind to draw level through another brace from Emmanuel Nwogu. Hashimu Musa made it three for Jaramajiji but Uche Duru from Waru levelled the scores at 3-3 close to regulation time. Karamajiji then went ahead to prove the better side with a 3-2 penalty kicks scoreline. For coming second, Waru Apo got N7,000.00, a trophy and some balls. Bello Mohammed, coach of Karamajiji said they were happy with the foundation for putting together this initiative that has helped to bring them together. “This is a big psychological boost for us who are displaced far away from home. This competition made us forget our troubles and horrors. I am very excited to win the cup and this have helped to wash away our anxieties and sufferings as IDPs.” Speaking after the finals which was organised by the Okoku’s Foundation in an effort to give back to the society, Paul Okoku said he feels fulfilled to have put smiles on the faces of the IDPs. “I feel really honoured and fulfilled to put smiles and hope on the faces of the children who are looking up to the society for hope.” Representative of the Minister of Sports and Youth Development, Bar. Solomon Dalung; Mr Osuoha Victor gave thumps up to Paul Okoku and his Foundation for bringing together a program that tells that Nigerians have not forgotten the IDPs. “You must not see yourselves as being in this condition permanently. Please keep hope alive,” he said.